For foods that have a risk of contamination from GMO crops and glyphosate, we require each batch to be tested and return a result of “no detection” in order to carry ANY of our seals. This logo means the product has been tested for the presence of glyphosate.

We Test ALL of our Products for Glyphosate - Since 2014

Glyphosate is in 80% of our food supply in the U.S., and may well be the most toxic chemical ever approved for commercial use, according to some scientists.

It reportedly destroys the microbiome of humans and plants, which is seen by some as the root cause of many modern diseases.

To learn more about the dangers of glyphosate, see:

Glyphosate Herbicide Causes Antibiotic-Resistant Bacteria, Kidney Disease, and Infertility
Is Glyphosate Responsible for your Health Problems?
Common Weedkiller Used in Modern Agriculture Could be Main Factor in Gluten Intolerance
MIT Researcher: Glyphosate Herbicide will Cause Half of All Children to Have Autism by 2025

The Glyphosate-tested program was started by Tropical Traditions due to the glyphosate contamination of wheat and other grains in North America. We have found that even wheat and other grains certified organic, or marketed as GMO-free (there currently is still no approved GMO variety of wheat commercially available in the market), will test for the presence of glyphosate, sometimes at levels nearly the same as conventional wheat.

So if there are no GMO varieties of wheat in the market, how is glyphosate getting into the wheat and other grains?

There are two reasons that a farmer wants to [use glyphosate on non-GMO crops]. It is for late season weed control in situations where he has patches of green weeds in the field that came up late. [This is commonly done with wheat and barley.] It is a little slower to harvest when weeds are present.

The other reason involves late season snow. In the northern region such as in the Dakotas, in certain parts of Montana, and in the Prairies of Canada, there is a very short growing season. If it snows on the crop at harvest then you may lose the crop, because you can’t get back into the field to do the harvest.

In these regions, 70% of the wheat and barley are desiccated with glyphosate before harvest. [This kills the plant so that it will wilt and dry]. Farmers don’t want to take a risk of losing their entire wheat and barley crop, so they will take a cut in yield and quality by using glyphosate a few weeks before harvest and then harvest the crop early.

Farmers don’t realize how much they are contaminating that food or feed product when they do this. They will accept the cut [in quality and quantity of the crop], because that can buy them a week advantage in harvest. It’s really more done for ease and planning. However, it is just the dumbest thing you could ever do from a health and safety standpoint.

In fact, beer brewers are having a problem with glyphosate. A few years ago, when one of my colleagues wanted to get more Abraxis test strips for testing materials for glyphosate residue, he was told that they had a 3-month backlog. He asked, what was causing this? He was told that every load of malt barley coming out of North Dakota has to be tested because the glyphosate levels were so high that it kills the yeast in the brew mix. (Source)

Anthony Samsel and Stephanie Seneff published a study titled: Glyphosate, pathways to modern diseases II: Celiac sprue and gluten intolerance in Interdiscip Toxicol. 2013; Vol. 6 (4): 159–184. They produced the following chart showing a correlation between glyphosate use on wheat and Celiac disease: 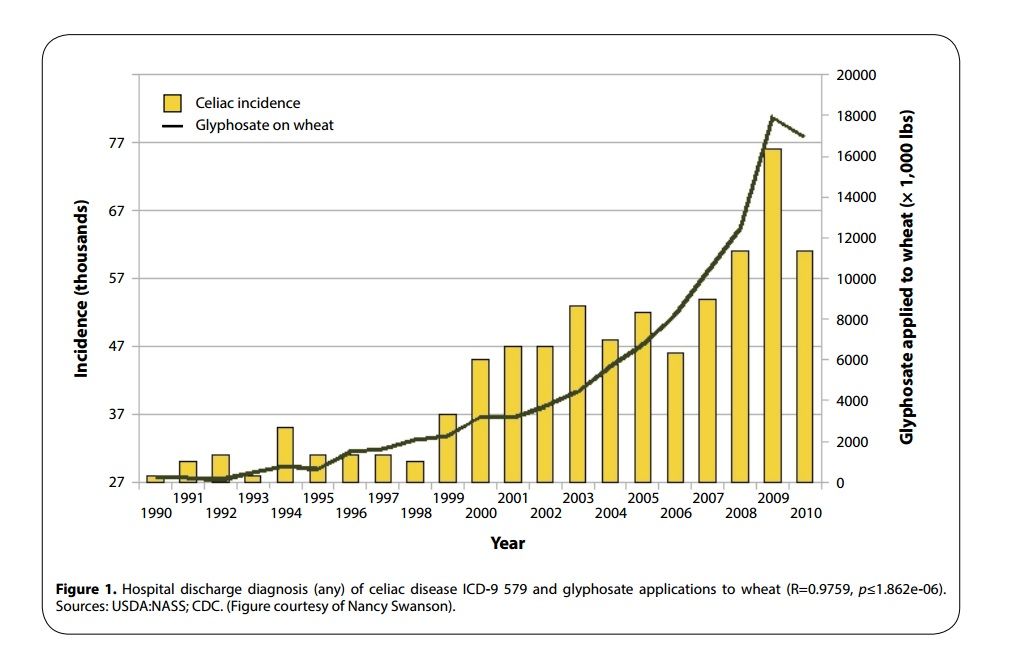 Organic Wheat not much Better than Conventional Wheat in Glyphosate Residue

Tropical Traditions decided to test this research on our own. We bought commercially available conventional (non-organic) wheat products from Canada, Montana, and South Dakota, and sent them to a well-known and respected laboratory to test for glyphosate.

All tested positive for glyphosate residue. The range was from 0.07 mg/kg to 0.09 mg/kg.

Keep in mind this is glyphosate found in non-GMO crops. For a GMO crop such as GMO soybeans, which are sprayed heavily with glyphosate, the range is typically between 3.3 and 5.7 mg/kg. (Source)

Next, we tested USDA certified organic wheat. Glyphosate is not allowed to be sprayed on organic wheat according to USDA organic standards. Sadly, we did find the presence of glyphosate residue in organic wheat, and other organic grains, including organic barley, oats, spelt, and einkorn. The range was from 0.03 to 0.o6 mg/kg, just slightly lower than the conventional grains we tested.

The only organic grains we tested that tested clean were organic rye and organic millet.

The USDA organic standards change so much that it is hard to keep up with what the latest standards are. We knew, for example, that the EPA had just increased the limit of glyphosate allowed in food in 2013, despite a loud public outcry. (See: EPA Raised Residue Limits of Monsanto’s Glyphosate Herbicide).

So we were not too surprised to learn that the levels of glyphosate we were finding in organic grain products were within the limits allowed by the USDA for organic certification. The organic standards for pesticide residue can be found here.

The EPA establishes the maximum allowed levels of pesticides, or EPA tolerances, which may be present on foods. Although most EPA -registered pesticides are prohibited in organic production, there can be inadvertent or indirect contact from neighboring conventional farms or shared handling facilities. As long as the operator hasn’t directly applied prohibited pesticides and has documented efforts to minimize exposure to them, the USDA organic regulations allow for residues of prohibited pesticides at or below 5 percent of the EPA tolerance.

Since the EPA standards for glyphosate are already very high, it was not surprising to find out that the levels of glyphosate residue we were finding in USDA certified organic grains were well within their limits. If both the EPA standards and USDA organic standards were too low for pesticide residue, probably more than 90% of the U.S. food supply would not be eligible for sale. It would be too contaminated.

Unlike the EPA and USDA organic program, we don’t like any glyphosate residue in our food at all. So the Tropical Traditions and Healthy Buyer’s Club product line has a zero tolerance level for glyphosate.

For all grains now, we test every batch for the presence of glyphosate. If we detect any residue present, we don’t sell it. We are also beginning to test other organic products besides grains. We cannot guarantee any food that has been outside is 100% glyphosate-free since glyphosate has even been detected in our rainwater now. But we have no allowable limits at all, and so as we test our products, if we find any glyphosate present at all, we will stop selling it.

Is the Glyphosate-Tested Program a Guarantee?

No. To guarantee a product is 100% glyphosate-free is impossible. We cannot test every single kernel of corn we sell, for example. Here are our current testing standards:

We have a ZERO percent tolerance for glyphosate. If any residue shows up, no matter how small, we do not sell that product. GMO-tested is a higher standard than non-GMO verified or certified. We test any food that has a GMO equivalent before selling it to you, and we have a ZERO percent GMO tolerance. Other non-GMO verified or certified programs allow some percentage of GMO presence, usually close to 1%. GMO-Tested, on the other hand, means we tested for the presence of GMOs, and found NONE – ZERO percent. If we find ANY GMO present, we do NOT sell it.

Corn is by far the most problematic product to source GMO-free. Since we had to pull some of our own organic corn off the market due to very small amounts of GMO present, we decided to also test products in the market that had non-GMO claims on their labels. We found that two out of the three products we tested that were labeled non-GMO indeed had GMO DNA present. So we knew that making a statement or having a standard of GMO-free was not enough: every batch of products that had GMO equivalents present in the environment needed to be tested for GMO DNA, particularly corn. Any corn product we sell will have every batch tested prior to bringing to market.

Our GMO-Tested logo is only placed on products that have an equivalent GM product in the environment. We feel making non-GMO claims about products which currently have no GM varieties can be confusing and misleading to the consumer. A far greater problem for non-GMO products is the presence of glyphosate, and we have a need to identify non-GMO and organic foods which are glyphosate free.

When you see the Healthy Traditions GMO-Tested logo, you can be assured that it is to distinguish it from GMO products of the same variety in the market, and that we have tested that product prior to bringing it to market. Products which do not have any GM equivalent variety do not need to be tested, unless there is evidence that cross-contamination can occur, such as grains milled in large feed mills that also mill corn or other GM products.

The Problem with Current Certifications

There are some private non-GMO verification/certification organizations in the United States. Companies have to pay to be listed and provide documentation that their products are GMO-free.

In addition, many products that have no GM equivalents in the environment carry non-GMO labels needlessly, since it has become a major marketing tool. Sales of foods with non-GMO claims are in the billions of dollars, and growing.

While a non-GMO verification or certification communicates a negative statement about a product’s GM content, it says nothing positive about how that product was produced. Non-GMO conventionally grown products that make heavy use of dangerous pesticides and herbicides (such as glyphosate), for example, could still be labeled GMO-free.

We recently pulled three products from the shelves of a health food store that were labeled as non-GMO verified. Two of the three tested positive for GMO DNA, both of them corn products. Some non-GMO standards allow for close to 1% presence of GMOs and still claim “non-GMO.”